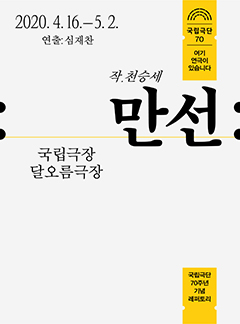 Manseon: The Yearning of a Fisherman

In celebration of its 70th anniversary, the National Theater Company of Korea presents Manseon?one of the best-loved works from its past repertoire. The play was selected through a playwriting competition in 1964, and subsequently premiered in the same year. It won the 1st Korean Theater and Film Arts Awards (now known as Baeksang Arts Awards), and was adapted into a highly successful film.

Out in the dark roaring sea, one boat loses its way.

A fisherman named Gomchi looks forward to making his fortune with a full load of white croakers. However, he becomes penniless when the ship’s owner charges him extortionate rates of interest on top of the rental fees. Faced with the danger of losing his daughter due to his debts, Gomchi once again sets sail for the tumultuous sea?this time with his son.

Chon Seung Sei’s Manseon is both a heartrending record of those living off the sea at the furthest edges of the land and a landscape of the most intense and gruelling moments. As the vast sea contrasts with the vulnerability of life, the waves calm down unhurriedly; life continues thus. One of the most powerful works in the 70-year history of the National Theater Company of Korea, Manseon: The Yearning of a Fisherman has been adapted for today’s audience by Yun Mi-Hyun, a playwright of keen contemporary sensibilities. Further complemented by Shim Jae-chan’s perceptive direction, the play returns with greater depth and energy, unfolding a story filled with both gravity and simplicity.

In a small village on Korea’s southern coast, fisherman Gomchi learns that the sea is full of white croakers and confidently sets sail. Eventually, he fulfils his long-lasting dream and returns with his boat full of fish. However, his joy does not last long as Lim Je-soon the ship’s owner, claims that Gomchi owes him money and takes everything away. To make matters worse, Mr. Lim refuses to lend him a boat until he pays off his debts. Worn out by poverty and anxiety, Gomchi’s wife tries to persuade him to quit fishing and start a new life. Yet, Gomchi departs for the sea once again with his son, vowing to catch another boatful of fish.

Chon Seung Sei made his literary debut in 1958 by winning the Dong-A Ilbo New Writer’s Contest with his short story “Jeomrye and the Ox.” In 1964, his play Catalyst won the Kyunghyang Daily New Writers’ Award. The same year saw him win the playwriting competition hosted by the National Theater Company of Korea. In addition, Manseon earned him the 1st Korean Theater and Film Arts Awards (now known as Baeksang Arts Awards). He is widely known for his concise and popular writing style, not to mention his use of symbolic yet elegant narrative structure, which allows him to address systematic problems of society.

Shim Jae-chan conveys human nature through realistic onstage expressions and insightful interpretations of works. Following his introduction to the world of theater, he worked as an assistant director for a number of Korea’s first-generation directors including Lee Won-kyung, Cha Bumseok and Lim Young-woong. In 1991, he founded Theater Troupe Jeonmang, and began pursuing his own unique approach to theater. His directorial credits include several plays that delve into human psychology such as Assembly of Animals, For You Who Are Adrift, Thus Have I Heard, Onion, Goodnight Mother, Agarwood, Here Comes Love, and Ensemble, the musicals Tick, Tick... Boom! and Urinetown, and the traditional music drama Baettaragi. He was the Executive Director of the gala event on the eve of the match in Suwon during the 2002 Korea-Japan FIFA World Cup.