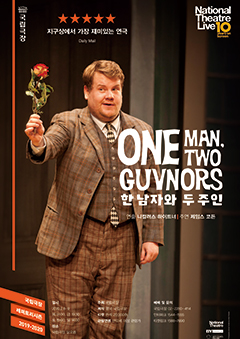 It is a live screening show captured from the live performance.

“A Must Watch!” Laughter-packed comedy recommended by James Corden

‘One Man, Two Guvnors’ was produced by Nicholas Hytner and premiered at the Royal National Theatre in England in 2011. It was successful both at West End and Broadway, making it a proven comedic play. It is based on the comedy released by the Italian writer Carlo Goldoni in 1745 and Richard Bean was in charge of the playwright changing the setting to Brighton, England of 1963. This work maintains the features of commedia dell’arte such as typical characters and fast-paced movements and dialog. James Corden, the host of the popular talk show, ‘The Late Late Show’ of CBS in the US, played the main character for which he won the Tony Award in 2012.
‘One Man, Two Guvnors’ starts with Francis, a bodyguard who loves to eat, taking on two jobs by being hired by two different employers so that he could eat more. Francis finds out a secret that his two employers must not meet each other and for such reason, he does everything he can so that those two do not encounter with each other. The fast-paced dialog, slapstick comedy, and band musics from the 1960s are mashed into a pleasant play. The Daily Mail called it “the funniest play in the world” and The Times called it a “killing funny comedy,” and it contains the epitome of comedy.

The funniest show on the planet. - Daily Mail
Wildly funny comedy. - The Times

Coming to theater to mark National Theatre Live’s 10th birthday, One Man, Two Guvnors was originally broadcast in 2011. This riotous comedy was a hit in both the West End and on Broadway, and it features a Tony Award-winning performance from the host of 'The Late Late Show', James Corden, as Francis Henshall. Francis Henshall becomes minder to Roscoe Crabbe and Stanley Stubbers. But as two men employed him at the same time, things get complicated and out of control. Francis struggles to keep Roscoe and Stanley from meeting each other, but will his impossible operation succeed?

In 1963, Francis Hanshall, who lives in Brighton, a southern part of England, was hired as a bodyguard for the mob boss Rosco Crabbe. Wanting to be able to afford to eat more, he searches for a side job and, fortunately, got hired by an upper class twit, Stanley Stubbers. The two employers do not know that they have hired the same bodyguard and Francis does everything he can to hide this secret. To make matters worse, the two employers hated each other and he has to make sure that they do not meet. His first employer Rosco Crabbe is, in fact, Rachel, the twin sister of Crabbe, who is disguised as Rosco. And Rosco was killed by Stanley. Making things even worse, Stanley and Rachel were lovers in the past. Will Francis succeed in making sure that his two employers do not meet?