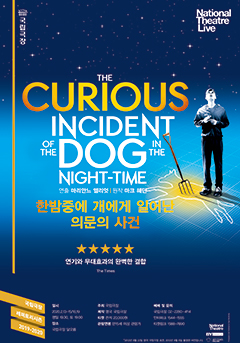 It is a live screening show captured from the live performance.
Interviews will be shown on time and there will be additional video after the curtain call.

Selected as the No.1 work that NT Live audiences want to see again

‘The Curious Incident of the Dog in the Night-Time’ is a story about a 15-year old boy Christopher who is suspected to be the culprit of killing the neighbor’s dog and then decides to use his special talents to find the true criminal. This work is based on the novel by Mark Haddon published in 2003 which received 17 literary awards including the greatest literature award of England, the Whitbread Award, selling over 4 million copies in 40 countries around the world. In Korea, the book has been popular since its release in 2004.
The play, ‘The Curious Incident of the Dog in the Night-Time’ expressed the psychology of the main character only through the stage, videos, and the movements and acting of actors, maximizing the imagination of the audiences. The play is produced as if the audiences are peering into the head of the main character, pulling the audiences into the play. The witty directing of Marianne Elliott who directed ‘War Horse’ and ‘Angels in America’ especially stands out.

If ever there was a perfect theatrical marriage of performance and effect, this is it. - The Times

The Curious Incident of the Dog in the Night-Time was first introduced at NT Live of the National Theater of Korea in 2018, and due to immediate sold out, it had to add extra screenings. It is coming back again this season, as the audience voted as the number 1 pick for the encore screening at the NT Live survey conducted earlier this year. It is a version taken at the National Theatre in London, so the stage is not as spectacular as the West End version, but it’s intriguing to see how Marianne Elliott astonishes the audience with her witty and eloquent stage. Based on Mark Haddon’s same title best seller, The Curious Incident of the Dog in the Night-Time premiered in the UK in 2012, then won seven Laurence Olivier Awards in 2013 and five Tony Awards in 2015.

The story starts with a 15-year old boy Christopher standing next to the corpse of the neighbor’s dog. Christopher is the prime suspect, but he uses his mathematical genius to solve this case and begins questioning people around him. The boy who never left his neighborhood and dislikes physical contact with strangers breaks out from his own world to begin his adventure into the world.