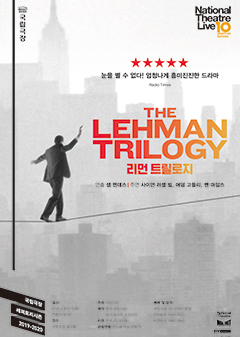 It is a live screening show captured from the live performance.

‘Lehman Trilogy’ is a work about the ‘Lehman Brothers’ incident in which the largest corporate bankruptcy in history became the starting point of a global financial crisis that began in the US in 2008. It is the most recent work of Sam Mendes, who captivated Korean audiences with National Theater (NT) Live ‘King Lear,’ and after its premier at the Royal National Theatre in England, the work received a spotlight being performed at Broadway, New York in 2019.
‘Lehman Trilogy’ compressed the 163-history of the Lehman family that built the global investment bank, Lehman Brothers, into 3 hours and 30 minutes. The work talks about the story of three brothers immigrated from Germany to the US in 1844 and started a small clothing store then gradually expanded their businesses over three generations, and it talks about how they started a global investment bank and how it finally fell. The fall of the Lehman Family that instantly froze the global financial market clearly shows the other side of American capitalism. Director Sam Mendes explained that, “How does a system that was devised to help people end up destroying people?” is the question that this work asks the audience.
Simon Russell Beale, Adam Godley, and Ben Miles play the roles of the Lehman Brothers, their children and grandchildren, thus acting as the characters over three generations as the lead characters of this epic saga. The three actors showed a remarkable performance beyond generation and time, and they were all named as the candidates for the Laurence Olivier Award.

The story of a family and a company that changed the world, told in three parts on a single evening. Academy Award-winner Sam Mendes directs Simon Russell Beale, Adam Godley and Ben Miles who play the Lehman Brothers, their sons and grandsons. On a cold September morning in 1844 a young man from Bavaria stands on a New York dockside. Dreaming of a new life in the new world. He is joined by his two brothers and an American epic begins. 163 years later, the firm they establish - Lehman Brothers - spectacularly collapses into bankruptcy, and triggers the largest financial crisis in history.

The three Jewish brothers, Henry, Mayer, and Emanuel Lehman left Germany and arrived in the US in search of a new life as penniless immigrants. The three brothers first settled in Alabama and started their business in cotton, which was like gold at the time. They later expanded their cotton farm into a factory and intermediated 24 cotton farms to all parts of the US from their office in New York. The Lehman Brothers ended up turning their business into an investment bank and they invested in everything that is lucrative from coffee to the railway industry. The aspirations of the Lehman family grew more through generations and the investment bank turned into a massive financial empire. But in one day in 2008, the Lehman Brothers suffer from a terrible nightmare before losing everything to the economic crisis...