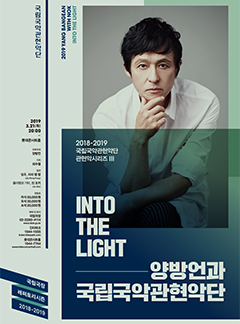 Known as a master of crossover music, Yang Bang-ean has been active not only in Korea, Japan and other Asian countries but also all over the world. Yang served as the music director for the opening and closing ceremonies of the 2018 Pyeongchang Winter Olympics to be acclaimed for his music’s harmony of Koreanness and globalness. For this concert, he plays a double role of composer and music director in order to open a new horizon for traditional Korean orchestral music, together with the National Orchestra of Korea.

The National Orchestra of Korea has often played traditional Korean versions of Yang’s representative works (e.g. “Frontier” and “Flowers of K”). Nevertheless, it is the first time for the artist to be commissioned by the Orchestra to compose a symphony. His new symphony called “Arirang Road-Diaspora” is a multi-movement work as long as 30 minutes. It is based on “Arirang” which would have been sung by Koryoin, ethnic Koreans deported to Central Asia＊. As the composer worked on the music of the KBS documentary celebrating the centennial of the March 1st Movement Arirang Road, he had a chance to travel along Koryoin’s route of deportation. He drew his inspiration from this trip to compose this symphony. Characterized by a clear and vivid story and by a unique and delicate sensibility, this piece describes the despair of those who had to be deported, their sorrow of crossing the wilderness along the Trans-Siberian Railway, their nostalgia felt as they sang “Arirang” and their wish for many souls to return to their fatherland.

The concert is conducted by Choi Soo-yeoul, young virtuoso who has been recognized for his outstanding musical interpretation as the artistic director of the Busan Philharmonic Orchestra.

The concert Yang Bang-ean and the National Orchestra of Korea-Into the Light is divided into two parts. The first part is focused on a dense performance of “Arirang Road-Diaspora,” a multi-movement symphony under one theme. The second part is filled with Yang Bang-ean’s representative pieces played by the National Orchestra of Korea in collaboration with Jia Peng Fang, a master erhu player active in China and Japan, and with flamenco musician Oki Jin who studied traditional flamenco in Spain and has drawn attention by combining it with Asian folk music. Yang joins them with the piano. The audience has high expectations for this part because it is an occasion to enjoy newly arranged pieces by Yang. For this concert, the National Orchestra of Korea increased the number of its members from the existing 60 to 70. moreover, the Orchestra will actively use readjusted Korean instruments such as the ajaeng, saenghwang and piri with low notes. All of this is to ensure rich and dynamic sound. The music scene is already paying close attention to this collaboration between Yang Bang-ean, a composer gathering together the East and the West, and the National Orchestra of Korea, an orchestra exploring new forms of creative orchestral music.

* Deportation of Koroin / In 1937, about 170,000 people of Koroin, who had lived in Primorsky Krai in the Russian Far East, were forcefully moved to Central Asian countries such as Kazakhstan and Uzbekistan, as part of Joseph Stalin’s policy of systematic population transfer. Deprived of their hard-earned living space in Primorsky Krai, they painfully moved to Central Asia through a long journey of over 30 days along the Trans-Siberian Railway. It was beginning of the community of ethnic Koreans called Koroin today.

About the Composer and Performers

Yang Bang-ean is a crossover musician working as a pianist, composer and producer. He participated in the performance celebrating the 70th anniversary of UNESCO that took place at the headquarters of UNESCO in France in 2015. He also served as the music director for the opening and closing ceremonies of the 2018 Pyeongchang Winter Olympics. In so doing, he has built his own world of music on the global scene. He has also widened his musical spectrum successfully to broadcasting, film, game and animation, producing music for The Tea Horse Road (KBS documentary) and Beyond the Years (film directed by Im Kwon-taek). He was the artistic director of the Yeowoorak Festival, a representative festival of the National Theater of Korea, for three years. He also directed the music of the changgeuk performance Seopyeonje by the National Changgeuk Company of Korea. These activities have led him to be recognized as someone interpreting Korean themes in a sophisticated way for today’s audience.

Choi Soo-yeoul is a young conductor who has recently been more active than any Korean conductor with his musical experimentalism and soft charisma. He was taught by Jeong Chi-yong at the School of Music of Korea National University of Arts and attended master classes by world-renowned virtuosos including Chung Myung-whun. After conducting numerous major Korean orchestras including the Seoul Philharmonic Orchestra, KBS Symphony Orchestra and Korean Symphony Orchestra, he currently serves as the permanent conductor of the Busan Philharmonic Orchestra. Starting from the concert Recompose in 2014, Choi has collaborated with the National Orchestra of Korea for Recompose in 2014, 2015 and Permanent Composers of the National Orchestra of Korea-Kim Seong-guk and Jeong Il-ryeon in 2016. Through these concerts, he has been recognized as one of the best conductors delicately expressing the grammar of traditional Korean music on the basis of his outstanding interpretation of modern music.

Born in 1958 in China, Jia Peng Fang began to compose at the age of five and to play the erhu at the age of eight. Despite the oppression during the Cultural Revolution, he continued to play the instrument and joined the China National Traditional Orchestra. Recognized for his talent, he became a principal erhu player. Later on, he went to Japan to be acclaimed for his musicality and popular appeal. He then had concerts and released albums in Japan and China while also engaging in diverse broadcasting activities. Meanwhile, he is taking the lead in promoting the erhu widely.

Oki Jin was born in 1974 in Japan. After specializing in the flamenco guitar in Spain. He came back to Japan to collaborate with a variety of artists in order to expand his world of music. He was recognized for his talent by becoming the first Japanese artist to win Spain’s Nino Ricardo National Competition of Flamenco Guitar. He is currently presenting colorful performances in cooperation with diverse musicians in Japan, Spain and other European countries. He is particularly interested in combining Spanish folk music flamenco and Asian folk music.